Abraquest has recently had its add books option improved in order to make things as quick and as simple as possible. This post explains the reasoning behind the changes and also reveals some future plans.

Customers will know, that adding Books is something that has to be done at initial setup and also when new books are purchased.

In recent years this has been connected to the Abraquest Cloud (available to Abraquest Software Assurance customers), which contains over 2.5 million books. This saves typing and thus a lot of time when entering books. You scan the ISBN, then scan the school barcode on the book, and Abraquest searches these details usually in well under half a second, filling in as much information as possible. When you save, the information filters back up into the cloud for the benefit of any other libraries you may have and also other Abraquest customers.

This change alone has been responsible for doubling the speed at which new books can be entered.

Recently we reviewed Add Books and made the second major change to it since our founder Maeve Denny retired. This is what this post is about.

Previously all the input fields were in one place as follows: 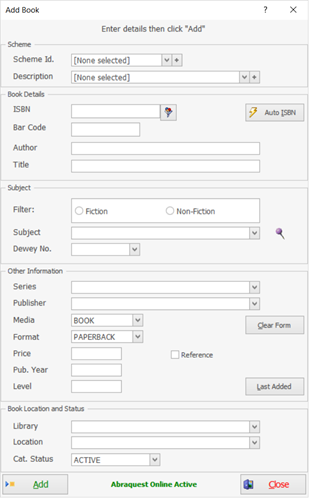 The new page is very similar but the fields that need to be input are on the left and the optional ones are on the right: 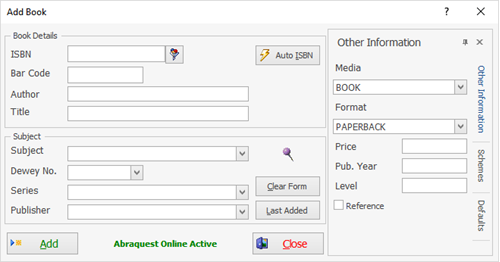 The response so far has been very good.

The next changes are going to be to move the details on the schemes tab into a separate page altogether to improve the processing of scheme books (these are books that share the same ISBN such as certain Oxford Reading Tree books).

Watch out for a blog post on that one in the next few months.