Abraquest Release 2.8.7.0 is nearly here - it contains a big time saver for schools that can import pupils via an Excel spreadsheet. Also two new book reports. Much more coming soon.

This release of Abraquest is likely to be one of the last releases that supports Windows XP. Due to the timing of this release (beginning of school year) we would like our few Windows XP users to be able to use this release immediately, although we strongly recommend that, Microsoft having removed support for Windows XP in 2014, that these users move up to Windows 7 or later as soon as possible.

At this time of year, "Year End" should be run to move all the pupils up a year, or make the final year pupils "Leavers". This is necessary because of statistics and the fact that Abraquest asks for the class then the person when issuing a book to a pupil.

The necessary procedure would normally be:

This year, with this release, you have another option. If you have SIMs or something similar, then you can request a spreadsheet of the entire school (for the current year) rather than just the intake and replace all the steps above. Abraquest will handle all the class changes (if any) and make pupils who aren't in the spreadsheet, leavers. 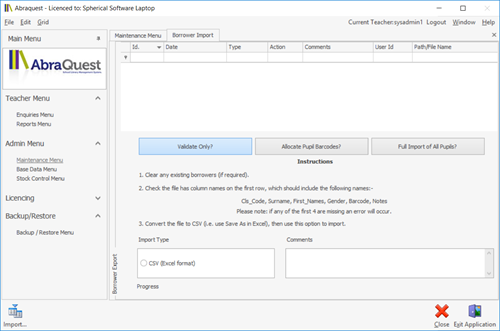 Both reports can be split by gender, so this is an additional way (with slightly less mouse clicks) to get the top 10 books for girls in year 5 for example.

Ongoing work on reports are part of our drive to make available as easily as possible, the information that is stored within Abraquest from the book database and from Issue/Returns.

As always, Abraquest Releases are free to our Abraquest Software Assurance customers. There is a lot more to come in the next few months because we have quite a backlog of requests we are finally going to clear. So many software assurance schools will be receiving a month free for each request made, in the coming months.

Abraquest 2.8.7.0 is coming today, 28th August 2018 or the 29th at the latest. We are just completing the help file updates so it should be available by the end of the day.